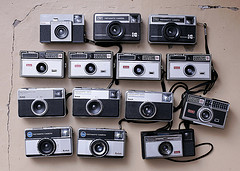 After reading about Kodak’s recent decision to drop its iconic Kodachrome range I decided to see what else they were doing.

Of interest to me was what they were doing to re-invent themselves and how, if at all, were they utilising Social Media Marketing.

And what I found was a story that summed up, in a practical manner, the message of the Grumpy Old Managers Guide.

Surely with the uptake of digital photography a company that was a world leader in providing film products to consumers was headed for the scrapheap. But in five years it has gone from being a consumer business to a B2B business. About 70% of their business is now direct to business not consumers so maybe they don’t need Social Media.

The most amazing statistic I found was that 60% of their currently most successful product lines did not exist two years ago. This is a company that is seriously re-inventing and rejuvenating itself.

So when I saw the headline “Micro-blog big for Kodak” in The Media section of The Australian above a story by Simon Canning I was eager to read all about it.

It seems Kodak’s Global Chief of Marketing, Jeffrey Hayzlett, is a classic example of what we are talking about … He started using Twitter to stay in touch with his kids and now has become one of the most followed business execs in the world on Twitter.

He has over 6,000 followers around the world, many of them are Kodak employees.

Hayzlett says he started using Twitter and Facebook as a way to link to his family, “Then I had this other family of Kodak customers and employees, then I started getting media and pundits, then everyone else started following after that.”

Social networks have now become so important to Kodak that they now have a full time “listener”.

So Social Media is playing a vital role for Kodak in listening and learning as they rebuild and refocus around market needs, demands and expectations.

He goes on to say Twitter etc is jut another form of communication that is very relevant right now…. as was the Fax once upon a time. “Maybe it will stand the test of time, but no one has stopped the most effective tool and that’s a sit down one-on-one,” he says.

So all in all Jeffrey Hayzlett sums up what we are talking about to anyone who will listen – start using the tools in a non business sense to work out how they work and then look at how they might apply. But at the end of the day they are just an addition to the tools that are already in use to communicate…. and right now they are very effective at that, as Kodak proves.